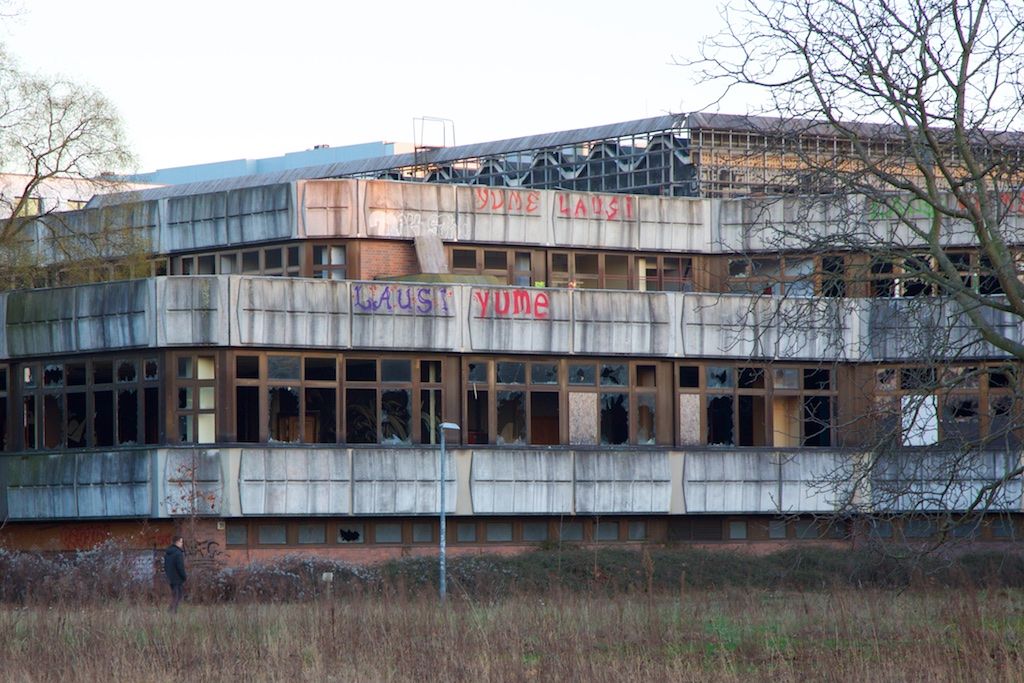 hile pootling around Hohenschönhausen on 24th December – i.e. Christmas Eve if you’re English, Heiligabend if you’re German – I came across this building that definitely did not look like it had been open for business.

It looked to me like a sports hall of some kind, a notion confirmed by an adjacent sports hall that looked new: possibly a replacement for this defunct one, I reasoned. A couple of guys were wandering along the path towards me; they looked like locals so when they got nearer I asked them if they knew what the building used to me.

One of the men, an elderly grey-haired chap smoking what looked like a cheroot, just stared at me with mischievous blue eyes. His slightly younger companion, a beefy, swaggering type, looked suspiciously at my camera and then said – in German laced with a heavy Eastern European accent: “It was a hotel!”

“Naaaw!” I countered, since it was only three storeys high and would be a pretty off-the-beaten-track place to build a hotel, even by GDR standards (it definitely looked like a GDR structure). In the end, we were both right. The building was once the Kongresszentrum des Sportforums Berlin, or Conference Centre of the Berlin Sport Forum), and the annex was used as a hotel.

According to a post by David Yates on his AndBerlin.com, both the Kongresszentrum and Sporthotel were built to complement the Sportforum Berlin (or Sportforum Hohenschönhausen), which was established in the 1950s as a centre for sporting excellence.

“The Sportforum, which is still operational, is the second largest sports complex in Berlin after the Olympiapark and the 35 sports facilities here are used for training elite athletes as well as for recreational sport. The complex was also previously known as the Dynamo-Sportforum as it was home to SC Dynamo Berlin, the sports club of the Ministry of Police and the Ministry for State Security (the Stasi).

It was here that BFC Dynamo played their home games from 1961 to 1971 and have done again since 1992.  It is said that Erich Mielke, head of the Stasi, was so determined to establish BFC Dynamo as the most successful team in East German football that the players of the then leading team, Dynamo Dresden, were forced to relocate to Berlin in 1954.”

I didn’t manage to get inside, but he did so if you want to see more pictures click here.